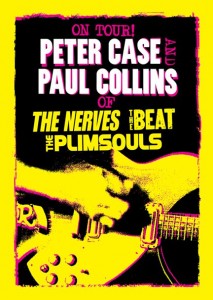 Two members of the band that originated Power Pop as we know it plan to tour the U.S. and Canada in 2012. Before embarking on a string of dates in Germany, Paul Collins announced on his Facebook page that he and fellow Nerves co-founder Peter Case will unite for several concert dates beginning March 1, 2012 in Vancouver, B.C.

Collins, Case and Jack Lee formed The Nerves in 1974 and produced a new, unique sound that would influence many bands to come. With that, they created the Power Pop genre, which continues to have a huge worldwide following. While The Nerves only officially released one EP, one of its tracks was the history-making “Hanging on the Telephone.” That track would later be covered by Blondie and become a mainstream chart hit.