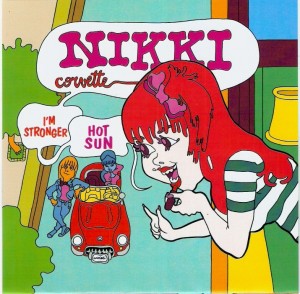 Only Nikki Corvette can get people up and dancing to a song about dealing with people of the despicable sort. The power-punk queen proves that once again with â€œIâ€™m Stronger,â€ the lead track to her first solo release since 2006, which is set to be available worldwide on April 14th.

In the first track, â€œIâ€™m Stronger,â€ Corvette sends a strong message with no-nonsense lyrics like â€œGot so tired of your indiscretion/and stupid little lies/itâ€™s all past now/left you behind me/youâ€™re just not worth my time,â€ through her classic musical persona: a mix of toughness, attitude and a playful coyness that can say both â€œcome hitherâ€ and â€œdonâ€™t mess with meâ€ at the same time.

â€œ’Iâ€™m Stronger’ is for everyone dealing with mean, spiteful people and standing up for yourself by being better than they are, standing strong. It’s pretty power-pop,â€ says Corvette.

Taking a completely different direction, â€œHot Sun,â€ is an all-out summertime party tune, meant to be blasted loudly while driving on a freeway with the convertible top down reflective of early Nikki and the Corvettes music. Corvette says the cut offers â€œa little lightness to balance things off.â€

Both songs will be available via download and on vinyl (with two songs by Norwegian group The Dahlmans on the flip side) at the Surfer Ki Records website.

Nikki Corvette will appear in an upcoming Revenge of the 80s Radio show to talk more about her new music.