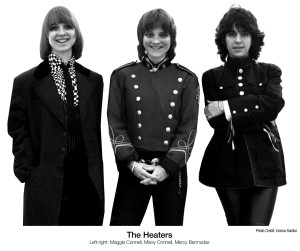 Our week of 8.12 show podcast/syndication edit is up.Â Maggie Connell of The Heaters is our guest. The Heaters were one of the LA New Wave sceneâ€™s hottest live acts of the late 70s. Led by Maggie Connell, Missy Connell and Mercy Bermudez, the band forged their own sound amid the ascension of the new genre in southern California: a mix of 60s soul, the early girl groups and punk. The Heaters will release the tracks they recorded in 1983 in a few different locations (not in big studios) in a compilation titled: American Dreams: the Portastudio Recordings.

Maggie will discuss the formation of the band, their sound, the energy of their live shows versus studio recordings and the release of the 1983 tracks – many of which were taped in Bermudezâ€™ parentsâ€™ home. We will play a track from the collection as well as a selection from Connellâ€™s 2001 solo album, The Luxury of Sadness.

We will also play music from The Saints, Huang Chung, Dislocation Dance, Mental As Anything, Book Of Love, Laibach and many more.