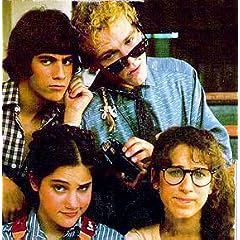 As a junior high school student, CBS Television Network’s show “Sqaure Pegs” was required viewing. The show was an instant hit, featuring Tracey Nelson of the famous Nelson family (Ozzie, Harriet, Ricky, etc) and future stars like Sarah Jessica Parker and Jamie Gertz.
[amazonify]B00151QYT4[/amazonify]One of the strong points of the show was the use of some of the great new wave talents of the era like The Waitresses and Devo, who each performed on an episode. The school’s radio station would play and reference several classic alternative performers as well.
The show did not last more than one season, but might have been on for longer if not for the rampant drug use and less-than-professional atmosphere as reported by TV Guide in 1984. The 25-year-old story was recently re-confirmed in a Heeb Magazine interview with Devo’s bassist Gerald V, Casale. In that episode, Devo was booked to play at Muffy’s Bat Mitzvah (although she also struck a deal with Johnny Slash’s band, Open 24 Hours/Open 48 Hours) for the gig. Casale told Heeb about the cocaine-induced hi-jinks that many attributed to the show’s quick death:

â€œThe girls were out of controlâ€”they were doing drugs and they were making out and they were coming on to us in a big way… They might have been 15 or 16, but in their heads they were already 40. I donâ€™t think there was a virgin on the set, except maybe a couple of the guys.â€

Casale also told Heeb of a crush on Gertz, who recently starred in the sitcom “Still Standing” with British comedian David Addy.
It would be naive to think that over-partying and rampant drug use has not a long-standing Hollywood tradition, but one of the secrets of the industry is to not let a good project be destroyed by those activities. Might the demise of “Square Pegs” be chalked up to lack of experience by those on and off-screen? The potential for a good show was there as was the talent, but declining ratings did not help the show’s producers either.