It was 30 years ago on the date of this post that a Chicago White Sox promotion became a controversial part of music history and a landmark in time. 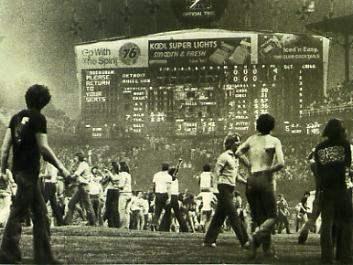 The Chicago White Sox wanted to bring more people into its Comiskey Park home and teamed up with area DJ Steve Dahl, who is given credit for the term “Disco Sucks” which adorned bumper stickers and t-shirts all over America at the time, to dream up the idea of “Disco Demolition Night.”

The Disco Demolition Night took place between two games of a doubleheader on July 12, 1979 against the Detroit Tigers where listeners to Dahl and others were encouraged to bring in disco records to be blown up in center field after the end of the first game. Those bringing in the vinyl were let into the game for 98 cents. The idea seemed like it was all in fun, but went awry as Dahl, who did not have an engineering degree, didn’t realize that part of center field would blow up with the records and make Comiskey unplayable for the second game. Worse, the hoard of non-baseball fan drunks in the stands would run into the field and destroy it. The idea might have been all in fun, but it became a media spectacle and might have been a public relations nightmare had it been done in the whiny PC 1990s.

The aftermath of Disco Demolition night saw Sox promoter Mike Veeck unfairly blacklisted from working in Major League Baseball again (he became a promotions genius in the minor leagues, where his talent was probably more needed) and the White Sox had to forfeit game two of the doubleheader and Steve Dahl remained popular and can be heard here today.

While all involved will admit the promotion went less well than expected, there still seems to be mass confusion, mainly caused by the mainstream media and extremist political punditry, about the purpose and importance of Disco Demolition Night. The Left side of the media spectrum (which, like today, was quite vast) and KC (of the Sunshine Band) took advantage and tried to claim “racial overtones” to the event, with some calling the overall backlash against Disco music as an attack on black culture and gay pride, forgetting the large amounts of straight whites who liked the genre and frequented clubs to dance to the disco beats. Like today, if a segment of people in the U.S. disagreed with certain powerful people they were denounced as “racist,” “anti-gay” of something similar. Unlike today, with less of the other side of the story being heard through outlets like talk radio and the internet, those claims usually went unchecked and imbedded in the minds of the average American. In truth, the minimizing and polarization of “Disco Demolition Night” virtually hid the truth about the backlash against disco and the significance of the Dahl/Veeck idea.

Disco Demolition Night gave voice to the several people who disliked disco for reasons including the following:

Disco’s generic people-pleasing lull-fest not only parodied the great black artists of the era, but almost eliminated originality and creativity from the mainstream radio stations, which would eventually happen a decade later anyway thanks to disco’s predecessors from the “suits:” formulaic “R&B/Urban” and “Gangsta Rap.” Today, there are many commentators who would have us believe that racism and hatred of gays was behind the fall of disco and the “Disco Sucks” movement, but it was truly a natural reaction combined with industry executives attempting to make the art of music more of a science.

Despite not gong as planned and the ensuing media “coverage” and and conventional wisdom surrounding its intentions, Disco Demolition Night’s important time-stamp in music history must not be overlooked. After that night, disco sales started to fall until disco became a distant memory about a year later in favor of more creative forms of music which were more underground at the time such as new wave, punk and what was then called “power pop.” Radio listeners began demanding something different from what the music and broadcast industries were offering, resulting in the birth of KROQ, WLIR and other legendary “new music” stations. Disco Demolition Night showed Americans who were unhappy about how popular music trends and what was to be played on the radio were being dictated to them learned they were not alone. The “followers” who were sucked in by disco seemed to be tiring of it already anyway, making room for the new set of dance club greats like the B-52s, Robey, Alphaville and ABC. Rock music came back to life as well as modern and classic rock radio formats re-dominated the standard ratings lists. MTV was born and became a great promoter of rock and new wave artists. Some of the great 70s rockers (Slade, The Doobie Brothers, Elton John, etc) tweaked their styles and enhanced their already legendary status. Without Disco Demolition Night, we may not be listening to the great classic alternative music of the 80s on our show today.

It would be several years later when the industry suits and politically correct types would come back and destroy music again. Hair bands of the 80s, generic post-disco repetitive club music, female human sirens to appease soccer moms and pretty boy bands would be their backlash against those who stood up to them on Disco Demolition Night and times thereafter. Radio corporations even found a way to water down the “alternative” format by mislabeling its mainstream “grunge rock” to that moniker, thereby forever changing the definition of the format.

While today there will be several posts referring to Disco Demolition Night as “racist,” “gay-hatred” and “anti-whatever,” the true significance of the record-destroying promotion needs to be seen more objectively as a backlash against the watering down of creativity and the subsequent rise of the music we still love today.