Adriana Kaegi‘s world premiere of her documentary Kid Creole and My Coconuts highlighted the CMJ Music & Film Festival at the Chelsea Clearview Theaters in New York Thursday night. The story of one of the most unique bands of the 1980s was coupled in a special double-bill with a documentary on another influential alternative band, The Fleshtones titled Pardon Us For Living, the Graveyard is Full.

Kid Creole and My Coconuts is arranged, written, produced and promoted by Kaegi, who is seen telling the story of Kid Creole and the Coconuts with a white wine in one hand with friend and collaborator Vivien Goldman (her list of credits, as we learn in the documentary, include a fact-based fiction book about the band). Goldman plays the role of interviewer as Adriana describes the band’s beginnings, the early days, their rise to power, the waning days and into today with authentic concert, behind-the-scenes and other candid footage taken over the years by Mama Coconut herself.

Kaegi’s and Goldman’s on-screen chemistry flowed so well that the discussion almost seemed more incidental than guided. Viewers get to see where Adriana grew up, her move from Switzerland to New York, learn how she was courted by August Darnell (before he was “The Kid”), visit some of the Manhattan dives they played in all the way up to performing for world leaders. Kaegi also talks openly about her band-mates including Darnell, Coati Mundi, Bongo Eddie and fellow Coconuts Taryn Hagey, Cheryl Poirier and Janique Svedberg (Janique was in attendance that night).

Adriana Kaegi is an enchanting storyteller who clearly captivated the CMJ audience as she told the tale of Kid Creole and the Coconuts with a both humorous and philosophical perspective from when the band was doing well, through the trials of in-band politics, tough times and industry complications. Kaegi’s own career is an eclectic one indeed: she is multi-lingual, an accomplished choreographer, costume designer, businesswoman and an internet video/social networking pioneer as the president of her own company, Dear Addy Productions. 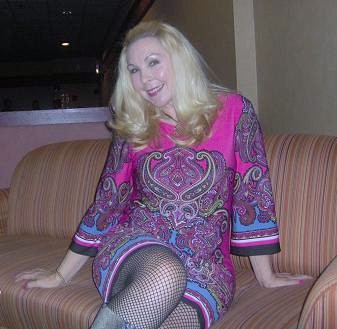 Fans of Kid Creole and the Coconuts should also know that at the post-movie Q-and-A period, Kaegi told fans that she, Darnell, Mundi, the other Coconuts and the rest of the band members are all doing well. The Kid is touring with a new Coconuts, Mundi continues to put out masterful music and Kaegi is promoting her new album, TAG, which you can hear through the Reverb Nation player on our right sidebar. We will keep you up to date on the potential distribution of Adriana’s Kid Creole and My Coconuts DVD as more news develops.

Kid Creole and My Coconuts followed the Fleshtones biopic, which was witnessed by some of the original band members. While the two bands were very different from each other sound-wise, their similarities are uncanny: they began in New York City, both groups were club favorites, had cult followings all over the world and reached much more mainstream success in Europe than their home nation.

The Fleshtones are considered one of the punk scene’s more influential bands by fans and other alternative musicians interviewed in Pardon Us For Living, But the Graveyard is Full, but the actual band members say they consider themselves as something of music history “outsiders.” That interesting perspective was portrayed well as a theme of the documentary by director Jeffery Barbier of ColdCuts Productions. Barbier gave Fleshtones fans another chance to live through the band’s different stages, personnel changes and turning points in their history. The Fleshtones still tour with the same vigor and energy as in their younger days and are releasing new music with Yep Roc Records, which group members made sure they paid homage to in a good portion of the documentary. Yep Roc boasts a lineup of artists including Nick Lowe, John Doe, Dave Alvin and Robyn Hitchcock.

While Fleshtones members seem to relish their longtime status as a cult-favorite of historical “underdogs” — even referring to themselves as a somewhat forgotten band — Barbier seems to be trying to convince them that they have an important place in punk’s epic narrative. This creates an interesting, but unseen, dynamic that adds flavor to the picture, which makes it stand out among similar biographies of other bands of the genre.

CMJ’s Organizers are to be commended for putting these two stellar pieces with interesting stories and styles together as a double-feature. These two exceptional bands now have archives worthy of their true marks in music history.