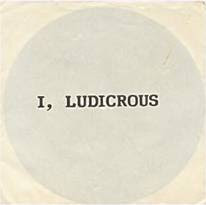 This week’s Revenge of the 80s Radio show will include a new track from British band I, Ludicrous. The band was formed in 1985 by John Procter and David Rippingale. In 2008, Martin Brett (formerly of Voice of the Beehive) joined the ensemble.

I, Ludicrous’ sound mixes elements of very early punk that would make Vyvvyan B*strd proud and just enough of a pop-ish element to add an extra energy to their music. Their latest single, “We’re the Support Band,” has earned a good amount of airplay in Great Britain and tonight marks its American debut.

We will also have classic alternative cuts from artists including The Motels, Gazebo, Holly and the Italians, The Clash and Wall of Voodoo.