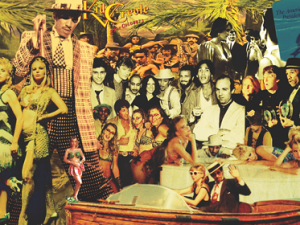 Adriana Kaegi‘s superb documentary on the band she co-founded will be featured at the Phoenix Art Museum on March 24th. This will be the first Western US screening of Kid Creole and My Coconuts. Adriana finished production in 2008; our review of the documentary (from New York City’s CMJ Music Festival) is here.

While with Kid Creole and the Coconuts, Kaegi had the foresight to chronicle a plethora of behind-the-scenes footage for historical posterity. All of her efforts would insure that she, August Darnell, Coati Mundi, Bongo Eddie, Taryn Hagey, Janique Svedberg, Cheryl Porier and all of the others who played and worked with Kid Creole and the Coconuts would be immortalized.

The past two years have seen a welcome resurgence in Kaegi’s singing career: she released her first solo album, TAG, in 2009 and has been working on new music including her latest single, I’ve Been Going Out.

Information on the screening of Kid Creole and My Coconuts at the Phoenix Art Museum can be found here.