Rhino Records announced it will release The Pogues‘ first five albums (Rum Sodomy and the Lash, Red Roses for Me, If I Should Fall from Grace With God, Peace and Love, and Hell’s Ditch) as a Box Set on March 1st, 2010. The compilation is part of Rhino’s “Original Album Series” editions, which include box sets of music by The Pretenders, Echo & The Bunnymen, Todd Rundgren and The Cars. 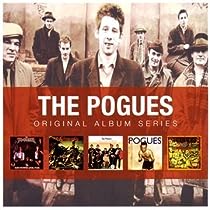 The Box Set can be purchased at our Revenge of the 80s Amazon Store.

There is, however, some bad news for Pogues fans in the states: According to their official website, the band will not be touring in the U.S. for March as they have been in most of the past years. There are also no plans for a St. Patrick’s Day show this year.