A massive blizzard will keep me from being live in the studio tonight for Revenge of the 80s Radio and time spent digging out of it along with the extra day-job work kept me from recording a new show. We are postponing the airing of my conversation with Haysi Fantayzee’s Kate Garner until the next week’s show (3/5/10), which will also feature new music by Kate as well as a brand new track from Debora Iyall.

Tonight, I will re-broadcast one of my favorite Revenge of the 80s shows, which features an interview with the elegant and multi-talented Adriana Kaegi from almost one year ago and shortly after the release of her brilliant TAG album. 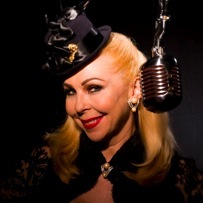 We apologize to those of you who wanted to hear our Kate Garner interview tonight, but we have her on next week. Thank you and enjoy the show.