Expectations are high when a Detroit punk legend and a Motor City garage band queen team up to form an alt-rock supergroup. Gorevette, formed by Nikki Corvette (Nikki and the Corvettes) and Amy Gore (Gore Gore Girls), deliver solidly with their first EP, Lustfully Yours.

The two seem to be musical soul mates as Gorevette combines the sound Corvette pioneered with a newer form of hybrid garage rock/power pop the Gore Gore Girls made their own — giving the collaboration a huge following in Detroit and potentially the rest of the nation with the release of Lustfully Yours and a coming tour of the Eastern US and Japan. 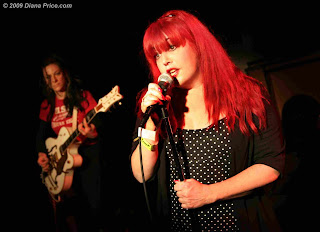 Nikki Corvette’s voice is as inimitable as her retro-cool-girl charm that comes through stunningly as she takes the role as the band’s lead vocalist. Amy Gore defines the term “badass” with her hard-grinding guitar solos and well-engineered chord progressions. They recruited Lianna Castillo (also of the Gore Gore Girls), who wields her bass with both grace and purpose, and Al King (Powertrane) on drums, whose fast hands emphasize the subtle precision of the way quartet works together, to form Gorevette.

Lustfully Yours is fast-paced and lively with the old-school power-punk sound that brings back the days of mosh pits at the local clubs. After listening to the album for a length of time, it would seem that the four have been playing together for much longer than the past year-and-a-third.

While under normal circumstances, a lead track establishes the tone of a group’s entire album. Gorevette took a different approach with theirs: “Nothing’s Gonna Stop Me” starts with King’s percussion fading in (the only cut that fades in on the CD), then Gore and Castillo start a full-fledged string attack. The song gives one the impression that the band would stay with the more modernized garage-group sound associated with the Detroit-area underground bands of today. Gorevette, however, immediately hits the listener from a different angle with the title track, which will prove to be the sexy breakthrough song of the collection. “Lustfully Yours,” the song, is a true throwback to the power-pop that Corvette pioneered in the late 70s. The same homage is paid to Nikki and the Corvettes’ self-titled Bomp! Records release in “Baby Let’s Rock” as Corvette’s vintage vocal style is complimented with the extra element of Gore’s guitar prowess.

Castillio’s brilliant basswork is showcased in “Fake It,” which has a bit of a psychedelic element sprinkled into a more raw-sounding garage band track. “Fake It” emphasizes one of the many things that makes Gorevette such a fun band to listen to: there is no pretentiousness to their music or lyrics; the message is clear here: “…Fake it for me, not for you/They will tell me what to do/Bend me, shape me, I’m a puppet too/Fake it now or F**k you.” 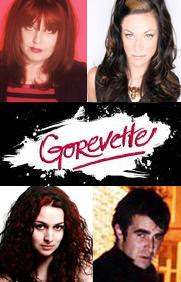 In another twist, Corvette shows her softer side with “Honey, Don’t You Know” as Gore invokes a late 50s/early 60s-style romantic, yet danceable, guitar lead. They go hard again with the next cut, “Brand New Lover,” as Gore’s guitar seems to sing and harmonize with Corvette in its intro. She later dazzles with another sizzling solo. “Candy man” offers Gorevette fans a pint of 60s B-movie kitsch to go along with the perfect blend of two eras of exquisite Detroit-style rock.

While other cities’ underground music scene have seen wholesale changes over the years, the quality Detroit alt-rockers always seem to remember their predecessors and insert elements of their heritage musicians into their work. With Lustfully Yours, Gorevette engages listeners on a splendid journey through every era of great Motor City garage punk and may become an influential lead in a new era of the genre’s illustrious history.