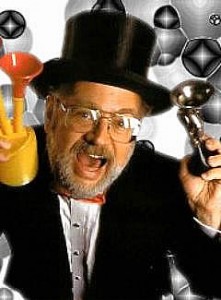 A man who kept us company every week with an amazing comedy record collection and his friendly voice, Dr. Demento, announced he will end his syndicated radio show this weekend. Here is a quite from his official website:

This was a very painful decision for the Doctor…he really hates to let it go after almost 40 years…but he has come to agree with his manager and his family that it’s necessary. The broadcast has been losing money for some time.

While he will be webcasting on drdemento.com, terrestrial radio will not be the same without him.

Dr. Demento was not just the wacky DJ with the weird records, he was the guy who understood us oddballs and outcasts from the 1970s and into this century. His show was interactive with an extremely loyal audience not different from the blogging communities of today. I remember the many people who called him on the request line telling him how demented they were and which song they wanted to hear from his vast catalog of obscure treasures.

As a fellow broadcaster, I have great respect for the good Doctor. He was always well-prepared, eloquent and fun. The pace of his show was always just fast enough and he catered well to his audience — one that spanned several demographics.

As a young fan in the 80s, i would always look forward to the “Funny 5,” which usually consisted of tracks like “Dead Puppies” by Ogden Edsl, “Wet Dreams” by Kip Adotta, “Fish Heads” by Barnes & Barnes (he was in the video) or some kind of track by the man who became a star thanks to the Doc, Weird Al Yankovic. I also looked forward to his Top Demented Video Countdown on MTV (when MTV was showing videos).

While the radio industry was becoming more predictable, Dr. Demento would play a new record sent in to him by some yahoo with a funny idea, then hit us with Spike Jones or a sketch from The Frantics. He is also the man who introduced me to the musical comedy stylings of the great Tom Lehrer.

Dr. Drmento, we will miss you on the radio, but thankfully you can still be heard via the internet.