Tonight’s Revenge of the 80s features an interview with the immensely talented Dale Bozzio of Missing Persons. 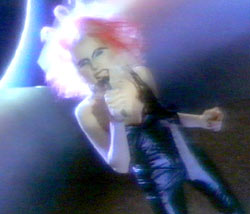 Dale, Terry Bozzio, Warren Cuccarillo and Patrick O’Hearn came from the Frank Zappa musical projects to form this vastly unique band whose fine musicians set them apart from most other acts of the time. They soon became icons of the New Wave era, often being considered the very definition of the L.A. New Wave scene.

While the other members of Missing Persons have also been successful, Dale is still in the studios and on tour. She’s working on several new projects (of which you will find out during tonight’s interview) and has recently put out a new CD: “Live From the Danger Zone”. Our interview with Dale leads off the second hour of the show.

During the show, we will also feature music from ABC, Howard Jones, Doug and the Slugs and Voice of the Beehive. A podcast of the show will be available starting Saturday.