Podcast for 6/27 Show Featuring Dale Bozzio Interview Is Up

The podcast for our 6/27 Revenge of the 80s Show Featuring Dale Bozzio is up. Dale is best known as the singer and a fouding member of Missing Persons, a band that was not only ahead of its time, but is considered by many music historians to be true icons of thw L.A. New Wave scene. Missing Persons was founded by four talented people who came straight out of the world of Frank Zappa: Dale, Terry Bozzio, Warren Cuccarillo and Patrick O’Hearn. The band’s musicianship may have been underrated at the time, but had been deservedly recognized in later years. 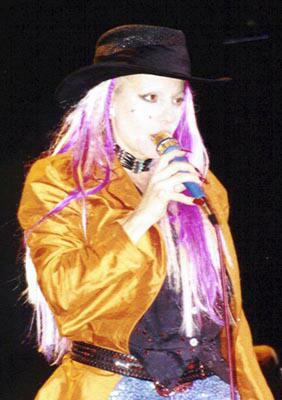 Dale is not only a unique performer, but an energetic, captivating and engaging person to talk with.
[amazonify]B00133KDTQ:right[/amazonify]
She is still working hard, and recently released a a new CD, “Live From the Danger Zone,” earlier this year. Last year’s “New Wave Sessions” was a huge success as well. Dale now lives in New Hampshire with her family and dog, who makes a guest appearance in the first part of the interview.

During our conversation, we talk about:

I am looking forward to the release of Dale’s book after talking with her about it. She discussed it briefly during the third segment of our interview.
[amazonify]B000VAQWZQ[/amazonify]
We also featured some classic Missing Persons songs, a track from “New Wave Sessions,” and a live “Walking in L.A.” from the 2008 CD “Live From the Danger Zone.”

During the rest of the show, we also played music from other great artists of the era including Voice of the Beehive, Doug and the Slugs, The Alarm and Paul Kelly. The VOTB track was from the rare CD “Bee Sides,” a compilation of previously unreleased material, songs on the flip sides of their singles and alternate recordings of a couple of tracks from “Honey Lingers.”