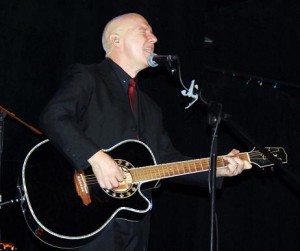 After reuniting with Ultravox and recording an album together, Midge Ure is touring the U.S. for the first time in decades. While he is set to play in major cities for the bulk of his time in the states, Ure made a stop to perform at Bearsville Theater in the upstate New York town of Woodstock.

Before Ure made his way to the stage, his backup band, Right the Stars, also served as the opening act. The 80s-influenced group of young fellows won the crowd over quickly, reminding new wave fans that their music lives on. They carried the spirit of New Romantic with a bit of a modern touch. 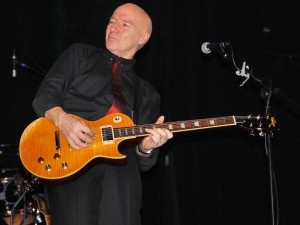 The crowd at Bearsville was eager to see Ure perform, the ages ranged from longtime fans to youngsters who weren’t born before “If I Was” ruled the U.K. charts. Ure took to the mic with an all black outfit and quite stylish blood-red tie as he led off with “I See Hope in the Morning Light,” from his 1991 Breathe Album. Ure mixed classics from Ultravox, his solo work and his biggest Visage hit, “Fade to Grey” throughout his set. The selection did not feature all of the Ultravox chart-busters, although crowd-pleasing classics like “Vienna,” If I Was” and “Dear God” were among those highlighted. Ure, like many early new wavers, knew his concert-goers would appreciate some of his deeper cuts in between the ones he and his bands were most known for.

Ure is the kind of performer who does not need to move around stage or make dramatic poses to command an audience. He makes that kind of skill look simple as if the crowd is his from the first note. It was as evident at Bearsville Theater in 2013 as it was at Live Aid in 1985. Still, he was very personable with his fans at the show and his comical quips and anecdotes seemed genuine and not forced or generic.Concert-watchers responded vocally and with some rather snazzy dance moves in front of the platform.

For his encore, Ure treated his faithful with an acoustic version of “Do They Know It’s Christmas,” the song he co-wrote for the Band Aid project (of which he is the trustee).

Ure says he is very happy to be back performing on the western side of the Atlantic: “It has been fantastic so far, people are so incredibly gracious… incredibly warming.”

He also says he plans to get more things rolling with Ultravox: “That’s the plan… I’m not going to give up, I’m going to keep hacking away until it happens,”

Ure started his U.S. tour on January 9 at New York’s Iridium Theater and will be on the road through hsi January 26th show at the Del Rey Theater in Los Angeles, CA. The latter show is a special one-off with Bow Wow Wow and Gene Loves Jezebel.