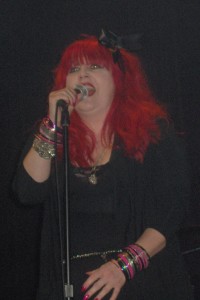 Melding two different eras of Detroit Rock and four very different stage personalities, Gorevette begins its first tour as a band after forming a year ago and playing several dates together in Detroit.

Gorevette was formed by Nikki Corvette (Nikki and the Corvettes) and Amy Gore (The Gore Gore Girls) after being introduced by a mutual friend. They added an all-star rhythm section with Lianna Castillo (The Gore Gore Girls) and Al King (Powertrane) and soon became one of the Motor City’s most popular live bands. Gorevette recently released their first album, Lustfully Yours, and joined The Donnas for a week-long Eastern U.S. tour that kicked off at the Highline Ballroom in New York City, one of Manhattan’s fine classic-alternative-friendly venues.

Interestingly, a band who credits a lot of their inspiration to Corvette, The Donnas (one of the lines in their song “Gimmie My Radio” is: “I want to be like Nikki Corvette“), were the tour headliners. Gorevette, however, took the stage as the veterans who are used to being on the top of the bill. Starting off with “Nothing’s Gonna Stop Me,” the four rockers quickly established themselves as having a stage performance as filled with high energy as their repertoire.

Their second song in the set was another from Lustfully Yours, “Baby, Let’s Rock,” which is one of the first songs the band recorded in early 2009. By then, Gorevette had already entranced the audience with their brilliant, yet contrasting, stage personalities, synchronizing extremely well with each other on the musical end as well. While on stage, Despite this being their first tour as a band, Gorvette performs as if they were longtime friends who simply enjoy playing with each other, thus displaying a solid chemistry that is not often felt when such super-groups form.

Seamlessly, the four band mates segue between their new music, classic Nikki and the Corvettes and selections by The Gore Gore Girls. Amazingly, Nikki can bounce from her higher-pitched voice while singing her early-80s songs (“Let’s Go,” “You Make Me Crazy,” “Gimmie, Gimmie,” to her new harder-edged tone in tracks like “Candy Man” and “Fake It.” After asking whether that was a strain on her voice, Corvette confessed to me after her set that while it comes easy to her now, it took some practice when she was getting back into recording and performing in the early 2000s. Hearing Nikki Corvette sing like that becomes a bit more special when Amy Gore plays the guitar parts and solos; her unique sound and precision string work adds another element to Corvette’s music and seductive bad-girl vocal style of her early days — further proving speculation that the two may be musical soul mates. 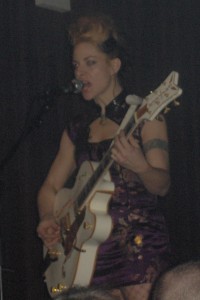 Watching Gorevette perform is made more interesting as a keen eye will find that each band member has a very different stage persona and sound, yet they work stunningly well when meshed together: Corvette sings to the crowd like they are almost intimate friends. She is flirty and playful between songs and can sing as if she is serenading each audience member individually. On stage, Corvette interacts quite often with Castillo, who is the antithesis of the stereotype detached bass player that stares away and rarely moves. Castillo displays stunning moves of her own as she plays off Corvette flawlessly to the point where one would think they had been playing together for years. Gore, however, chooses to dance less and speak with her axe; she plays with an intimidating, yet intriguingly mysterious stage presence reminiscent of the classic rock guitar idols of the 70s and 80s. Al King, the lone male of the group, looks loose and comfortable behind his drums set while working with fast and tireless hands to leading the high-speed pace of the entire set. 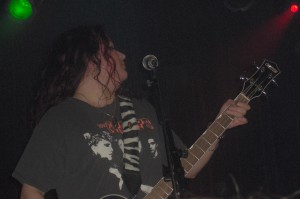 Although Corvette, Gore, Castillo and King are road veterans and have played several times together in Detroit, it is quite a difficult task to excel as they did on their first trip together kicking off in New York City. What makes it more amazing is that they played a quick live show 6pm that night at the John Varvatos Store (the former site of CBGB’s) — just a few hours before their scheduled start time at The Highline.

Being based physically musically in Detroit, Gorevette can be seen several times thruoghout the year playing various Motor City venues. After witnessing Gorvette in New York, I suspect many would agree with me that it would be worth moving there and subjecting oneself to bad football to be able to see this foursome live on a regular basis.

I was able to sit and talk with Nikki Corvette after Gorvette’s set. She says the band plays as well as it does together mainly because they embrace the differences in their performance styles. Whether the quartet is playing live or rehearsing Corvette says the the plan is simple: “Play hard and stay loose… Even is the show looks professional, it is not stiffly rehearsed like some rock bands.” 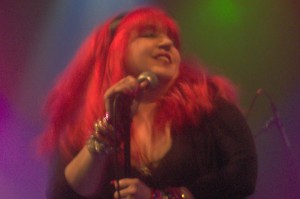 Interestingly enough, Gorevette might have only been a fun side project for Corvette and Gore. When they were introduced by Robert Matheu, a writer and mutual friend, the two ladies found out they both wanted to start a punk rock cover band. After s short while, Corvette said that she brought what was to become the song “Lustfully Yours” to Gore, they collaborated more on it and decided to write more songs together. The finished produce, their first CD (also titled Lustfully Yours) was released in January of this year.

After touring with The Donnas, Gorevette will soon head to Japan, a place that is very familiar with Nikki’s music. When I asked about the differences between playing in the U.S. and Japan, Corvette’s face lit up a bit, telling me that she was amazed with the reception she got last time she performed there. In fact, she says she was surprised to find that many fans were singing along with her and how much of a following her music has. In fact, some of the most popular “J-pop” groups are heavily influenced by the Nikki and the Corvettes sound.

Nikki says she and Gorevette have more road trips in their future plans. She also has an interesting creative project is in the works (keep checking the Revenge of the 80s blog for more information as it comes out). 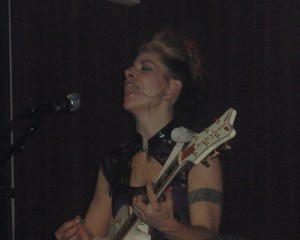 The Donnas were on after Gorevette. They evolved over the years into a new Detroit Girl-Punk/Heavy Metal hybrid that reveals influences from Nikki and the Corvettes, The Runaways and Girlschool. It is more likely that they invented that category (which I may also have just created for the purpose of this paragraph).
The Donnas built a strong following nationwide as they developed their own sound. In addition to their rather superb performance that night, The Donnas took some time to pay tribute to Motorhead, showing that not only do they respect the music they play, but they appreciate the true mentors of the alt-metal genre. 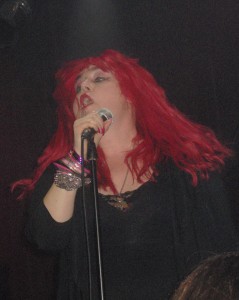 Gorevette and The Donnas continue their East Coast Run this week with dates in Boston, Port Chester and Baltimore. More information on those dates is here. dates and locations for Gorevette’s Japan tour can be found here.