Revenge of the 80s Radio is counting down the Top 50 Classic Alternative Cover Songs. The explanation and criteria can be found here. This is the first installment of our list:

The Australian band Mental As Anything produced several hits in their native Australia and only had one song on the US dance chart before reaching international notoriety with a track on the “Crocodile Dundee” soundtrack.

This cover appeared in the 1988 movie “Young Einstein” and reached #5 in Australia. While it did not chart elsewhere, it was played in the memorable homecoming scene for Yahoo Serious’ Albert Einstein character. Mental As Anything added its own semi-comedic style to the Beatles’ song. which was their Madness-esque quirk (minus the ska) that appealed to their fans around the world.

Scorpions drummer Herman Rarebell recorded an album under this name and scored an international dance-rock hit with his cover of the Surfaris‘ classic skins solo piece. While speculation may exist as to whether he got the name as a reference to Fred “Gopher” Grandy‘s character on the movie “Deathrace 2000,” there is little argument that this master skinsman’s album is a must-have for aspiring drum players for decades to come. 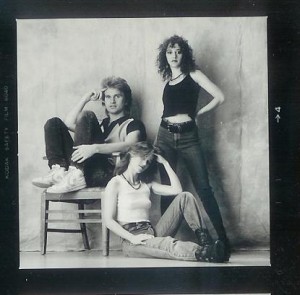 The Little Girls were best known for their hits “The Earthquake Song” and “How To Pick Up Girls,” with the latter song’s video being one of the first played on MTV. The band premiered this cover of the Dave Clark 5’s tune on the legendary Rodney Bingenheimer‘s show on KROQ when they were looking for a big-company record deal. Recently, Caron Maso Murray, Michelle Maso Tinsley and Kip Brown reformed and released two albums, Today… and Yesterday and Thank Heaven for Valley Pop. They also recorded a Christmas song written by Brown under the name “The Hollyberries” and are working on another holiday track.

This cover of Petula Clark‘s hit appeared on the B-52s‘ 1978 self-titled first LP. It was a total transformation of the song from its showtune-like sound to raw party new wave with skeleton keyboards, a small-club atmosphere in the recording and what sounded more like a garage jam rather than a studio recording by Fred Schneider, Kate Pierson and Cindy Wilson. This album also featured “Rock Lobster,” which introduced them to international stardom. This track told their new fans to expect anything from them.

Many bands have covered Gary Glitter‘s biggest songs (see: Joan Jett), but this all-female metal band gave a heavier rock sound to Glitter’s glam hit. Girlschool has been around for over thirty years and suffering the loss of guitarist Kelly Johnson to spinal cancer in 2007. This track was featured in a video where the band and Glitter perform a duet.