Today, October 10th would have been Kirsty MacColl‘s 50th birthday. Her friends, family and fans are holding a special celebration of Kirsty’s music on Sunday, October 11th starting at SoHo Square in London in tribute. 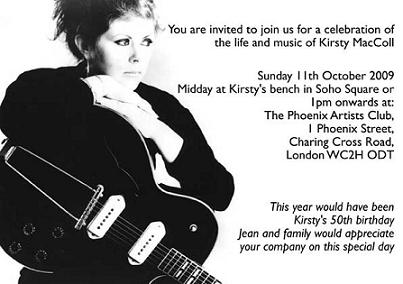 The sad news of her tragic accident in 2001 while vacationing in Cozumel struck music fans around the world and continues to be a story of corruption and injustice that led to a fight which her family continues today. Kirsty’s unmistakable voice, alluring beauty and entrancing music are still greatly missed buy her fans.

MacColl’s first big hit was 1979’s “They Don’t Know,” which (according to the official Kirsty MacColl website, was originally written for a quickly-done demo. The big career move, however, came with her being signed by Polydor Records, where she released her first album, Desperate Character, after hitting the UK Top 20 with “There’s a Guy at the Chip Shop Swears He’s Elvis.” Other 80s hits from MacColl include “Terry,” “Days,” “A New England” and her classic duet with The Pogues: ” Fairytale of New York.”

Like many great musicians of the 1980s, there were always problems in dealing with record companies and industry suits, but MacColl always persevered as she was involved with several interesting musical projects throughout the 1990s. Kirsty’s last original album, Tropical Brainstorm (2000), produced the hits “In These Shoes” and “Mambo De La Luna.”

In 2001, Kirsty MacColl took her family on a vacation in Cozumel, Mexico. While snorkeling with her children, a speedboat was racing toward one of her sons; they were an area of the ocean reserved for swimmers and snorkelers and no recreational boars were allowed there. Thinking quickly, McColl pushed her son out of the way and was killed by the motorboat, which continued to zip away from the scene.

The story got worse as it was learned that the speedboat was owned by Mexican shopping center mogul Guillermo Gonzalez Nova. He initially managed to circumvent the law by paying off one of his underlings to claim that her was the driver. The worker got off of his short prison sentence merely by paying a fine of 1034 pesos (at the time equal to less than $100).

The Justice for Kirsty Campaign

The Justice for Kirsty Campaign was established by MacColl’s mother, famous choreographer Jean (Newlove) MacColl, to seek a real prosecution and a fair trial for Kirsty’s death. [amazonify]1844545490[/amazonify] I had the honor of interviewing Jean on Revenge of the 80s in 2008; in honor of Kirsty’s 50th birthday, I will re-air that show on October 16th. At this time, little has been done aside from the 2006 liability judgment of
prosecutor Emilio Cortez Ramirez for his ineptitude in handling the case. Otherwise, the Mexican government offered only the proverbial lip service to the campaign’s calls for a judicial review. For more information on the Justice for Kirsty Campaign and if you would like to offer help to the fight, please log on to the organization’s website.

Sun on the Water 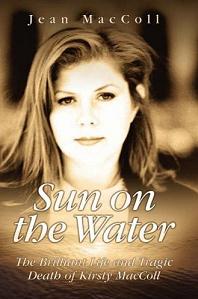 In 2008, Jean MacColl wrote a biography on her daughter, maned after Kirsty’s last song: Sun on the Water. It is the definitive book on Kirsty MacColl’s amazing life and career with the insights only here mother could convey on paper. Her posthumously-released
Greatest Hits collection, The Best of Kirsty MacColl, is still popular and “Fairytale of New York” continues to be a chart-topping song in the UK and Ireland each Christmas season.