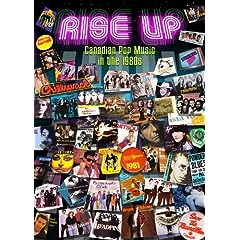 The Canadian contribution to the classic alternative music landscape has been underscored by music historians, yet not forgotten by die-hard fans who listened to college radio and watched MTV in the early half of the 1980s. This is likely the expected result of the bevy of radio industry suits that were still reluctant to offer more airtime to the great new wave bands of the time outside of those that gained exposure from popular movies or (at rare times) were forced in by listener demands.

Too often, great Canadian new wave bands were brushed aside as a by-product of programmers fearful of trending too far from the perceived “mainstream.” Therefore, US alternative music fans had to look hard to hear the likes of Martha and the Muffins, The Kings, Strange Advance and Men Without Hats music not titled “The Safety Dance.”

A new DVD documentary, Rise Up: Canadian Pop Music in the 1980s, [amazonify]B002VM7FF8[/amazonify]attempts to right the wrongs of music history outside the confines of the Great White North, exposing some of the great sounds out of the Canadian New Wave movement to classic alternative fans today. Rise Up tells the stories of artists like Chiillwack, Dalbello, The Parachute Club and others then continues with the Northern Second Wavers like the Cowboy Junkies and The Pursuit of Happiness, et al. The documentary includes performances and videos from the various artists.
The DVD is part of a series on Canadian music of each decade and is directed by Gary McGroarty, a well-respected music and film presence in Canada who also put together other documentaries in the series. It is available via Amazon.